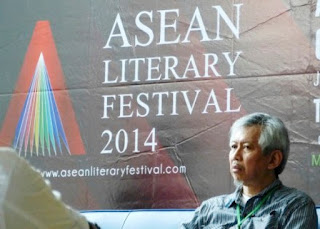 A few years ago, for a writers’ conference in another Asian country—the Republic of Korea, to be exact—I was asked to give a talk on what it’s like to be a writer in Asia, a place where we speak and write in many mutually unintelligible languages, a place about which we know little, outside of our own national boundaries.

In my lecture, I noted that writers’ conferences are “helpful because they provide a forum for us to share ideas and experiences, and perhaps even to air grievances, real or imagined.” At the same time, I spoke of another type of gathering that deserved to be explored. “Perhaps,” I wrote back then, “we also need a specifically Asian literary festival similar to the Osian’s-Cinefan Festival of Asian and Arab Cinema, a literary festival in which we can be exposed, not to academic disquisitions, but to poetry and fiction and drama.”

It seems that my wish has now been granted.

Of course, ASEAN, or the Association of Southeast Asian Nations, does not encompass the whole of Asia, although the region known as Southeast Asia, like the entire continent of Asia, is a place where the component nations hardly know each other. Still, I’d like to think that my wish has been granted because what we have here is a literary festival, the First ASEAN Literary Festival—in other words, an event that will primarily feature, not academic disquisitions, but poetry and fiction and drama. In short, literature.

I guess literature in this festival also includes the essay, because I have been asked to say a few words here tonight, about the role of the writer in the making of a just and humane society.

This is a tough topic. Plus, I have to confess that I’m not very good at delivering written lectures. Allow me, then, to approach this topic from a personal perspective.

The making of a just and humane society was not something I envisioned when I started to write poetry and short fiction, and when I joined the cabal of dreamers who fantasized about writing the Great Filipino Novel. As a teenager, I believed that my role as a writer was simply to write. After all, that’s what the word writer means, right? A worker works, a farmer farms, a driver drives, a teacher teaches, and a writer writes, right?

So I just wrote without any thought of grand and lofty goals. I wrote about my annoying pimples and my existential angst, the view from the classroom window and the food on the dining table, the stars in the sky and the carabao dung on the road. The way I saw it, I was writing primarily about myself and my surroundings, not about society in general, not about humanity as a whole.

Without realizing it, of course, I was writing about aspects of reality that I was not entirely happy with. And that reality began to assume a larger dimension after I dropped out of college and ended up in journalism. My work as a journalist put me in touch with a wide range of social types—beauty queens and jailbirds, slum dwellers and mansion owners, smooth-talking politicians and sloganeering student activists—and made me realize that my day job as a field reporter and my weekend diversion as a versifier shared the same goal: to tell the truth.

Early on, even as a journalist engaged in truth-telling, I saw myself primarily as an observer—not exactly detached, but still an observer. I liked quoting Groucho Marx: “I am not interested in joining any organization that is willing to accept me as member.”

When the student protest movement that I was writing about went into that intense period that has come to be known in Philippine history as the First Quarter Storm, I started to become not just an observer but also a participant, a joiner. I even became an organizer, helping set up a trade union in the magazine I worked for, and becoming a founding member of artists’ groups that held up the pen as an instrument for the people’s welfare. That was when I started quoting the other Marx: “The philosophers have only interpreted the world. The point, however, is to change it.”

Telling the truth and changing the world became dangerous preoccupations when martial law was declared in my country. The martial-law dictatorship shut down or took over television stations, newspapers, and magazines, and I found myself not only jobless but also on the wanted list of media practitioners. I ended up joining a group of fugitive journalists who put out mimeographed underground publications that dared to publish what the government-controlled aboveground media would not touch.

Less than two years after I went underground, the authorities caught up with me and threw me into a military prison, where I was subjected to torture and other indignities. I spent nearly two years in prison. No charges were ever filed against me.

But before my time in prison, I succeeded in pulling off a literary prank that was also a form of protest. Writing under a pseudonym, I submitted an English poem to a dictatorship-controlled magazine. On the surface, the poem, titled “Prometheus Unbound” and written in rather flowery language, was just about an episode in Greek mythology. But it could also be read as a metaphor of anti-dictatorship protest, since Prometheus was the Titan who was punished by the supreme god Zeus for giving the gift of fire to man.

To top it all, “Prometheus Unbound” was also an acrostic poem. When the magazine came out with the poem, word soon got around that the capitalized first letters of the lines, if read downwards, spelled out a Tagalog slogan that activists shouted in the streets before martial law: MARCOS HITLER DIKTADOR TUTA, meaning, Marcos, Hitler, Dictator, Running Dog. The military quickly swooped down on newstands and pulled out all unsold copies of the magazine.

This brings me back to the topic that I’m supposed to be discussing in this lecture: what is the role of the writer in the making of a just and humane society?

If you sincerely believe that you can build a just and humane society by running for public office, or by working with nonprofit organizations, or by marching in the streets, then, by all means, feel free to do so. Writers and artists, after all, are also citizens and must concern themselves not only with their art but also with the issues and problems confronting their society and their country.

But if you see yourself as a writer, then your primary task is clear: Write.

Write a song describing your utopian vision of what a just and humane society should be. Write a poem denouncing the injustice and inhumanity of governments that violate human rights. Write a story exposing the tyranny and the repression that make people’s lives miserable. Write a play extolling the work of those who fight for freedom and democracy.