In 1991, I was commissioned by the Laurel family—specifically, then Vice-President Salvador “Doy” Laurel’s wife Celia Diaz Laurel, who got in touch with me through entertainment columnist and talent manager Bibsy Carballo—to write a script about the life of Laurel Sr. for a two-hour TV movie. I recall that they were thinking of getting Eddie Romero, now National Artist for Film, to direct the biopic. I wrote a synopsis after some quick research and interviews, completed a 16-page scene-by-scene outline (or sequence guide), and began work on the script. For reasons I can no longer recall, the project was shelved before I got to finish the full script. 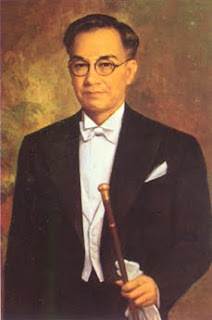 
Our story is told in a series of flashbacks. The cinematic present is the period from 1945 to 1951, while the flashbacks show us Jose P. Laurel’s childhood and checkered political career, with a time span of more than 50 years.

We open in 1945, in Sugamo Prison, Japan, where Laurel, 53, is in solitary confinement. Laurel, president of the Philippines under the Japanese occupation, is accused of collaboration and treason. As he writes his war memoirs and goes about his daily prison routine, he recalls his childhood and youth.

In July 1946, after a year in Sugamo Prison, and soon after the American grant of independence, Laurel is brought back to the Philippines. He is met at the airport by a sight that brings tears to his eyes: a crowd of welcomers cheering and applauding him, though he stands accused of treason. From the airport Laurel is whisked off to another prison, Muntinlupa, where his wife and family are waiting for him.

In the course of the trial, Laurel, now 55, defends himself, explaining why he agreed to serve in the Japanese-sponsored government, first as commissioner of justice and later as President of the Second Republic. Collaboration, he points out, was forced on him by circumstances, specifically, by America’s unpreparedness to defend its colony; but collaboration was also a way to ensure national survival and protect the people against the brutality and depredations of the occupation forces.

As he delivers his fiery courtroom speeches, we intercut another series of flashbacks showing crucial incidents in the dangerous political game by which Laurel, Recto, Manuel Roxas, Benigno Aquino Sr., and other prewar political leaders, while overtly collaborating, seek to outwit and outmaneuver the enemy.

In the flashbacks, we first see Laurel in Tanuan, Batangas, as a rowdy boy who likes to play truant. Once he falls into an open well while showing off that he can walk on its edge. As a teenager he spends a night in a cemetery during Holy Week in order to acquire an anting-anting. The son of a revolutionary who fought in Aguinaldo’s army against both Spanish and American colonizers, the young Laurel seems more interested in affairs of the heart, serenading girls with his guitar and his violin, than in public affairs and patriotic concerns.

The big incident of his teenage days involves a girl from whom he steals a kiss on a dare. The girl’s boyfriend engages Laurel in a balisong duel, but it is the boyfriend who ends up severely wounded. The ensuing court case depletes the resources of Laurel’s widowed mother, forcing the remorseful son to take stock of himself and resolve to go straight. He goes off to Manila as a working student.

At 20 Laurel elopes with the strong-willed Paciencia Hidalgo, also of Batangas. As a young husband and father, he takes the bar and places second, then goes to Yale on a scholarship and earns a doctorate in constitutional law with top honors.

At 33, not long after his return to the Philippines, Laurel becomes the youngest member of the cabinet when the American governor-general, Leonard Wood, appoints him secretary of the interior. It is a short-lived assignment. Barely five months later, Laurel suspends an American police detective accused of corruption. When Wood reinstates his fellow American, Laurel clashes with his boss and subsequently resigns in disgust. His move precipitates a cabinet crisis: all the Filipino cabinet members resign in a gesture of sympathy.

Two years later Laurel runs for the Senate (election at this time is by district) and wins handily, though he is a newcomer pitted against a veteran politico. When a constitutional convention is called in 1934, the 43-year-old Laurel is elected delegate from Batangas, along with another Batangueño, a political rival who is nevertheless a close friend: Claro M. Recto.

A few days before turning 45, Laurel is appointed by Manuel Quezon, president of the Commonwealth, as associate justice of the Supreme Court. Laurel now has the singular distinction of having served in all three branches of government: the executive, the legislative, and the judiciary. It is in his capacity as Supreme Court justice that he acquits a young man convicted by a lower court for the murder of his father’s political rival. The young man’s name is Ferdinand E. Marcos.

Laurel is serving as chief justice of the Supreme Court when war breaks out in 1941. Quezon prevails upon him to change places with Jose Abad Santos, secretary of justice, in the wartime cabinet. Laurel has been advised to be ready to join Quezon and Douglas MacArthur in the retreat to Corregidor, but when the time comes, Quezon decides to leave Laurel behind with instructions to remain in his station “for the purpose of meeting an invading enemy force and with a view to protecting the people and interceding in their behalf.” Laurel, who has already donned regulation khakis, is disappointed to be left behind, and briefly entertains the idea of going off to the mountains, but finally decides, however reluctantly. to accept Quezon’s assignment.

This crucial decision leads to Laurel’s appointment as commissioner of justice in the Executive Commission led by Jorge Vargas, and eventually to his selection by the Japanese to be president of the Japanese-sponsored Second Republic.

As commissioner of justice, Laurel tries to prevent arbitrary arrests and to save the lives of captured guerrillas. This brings him in constant confrontation with the Kempeitai, the secret police, commanded by Colonel Nagahama.

One guerrilla unit, however, unaware of Laurel’s role, sends out a hitman to liquidate him. The assassination attempt occurs at the Wack Wack golf course, but is unsuccessful. The Kempeitai pick up a suspect, a onetime boxer named Little Joe, and bring him to the hospital where Laurel is confined. Though he immediately recognizes the hitman, Laurel tells the Kempeitai he cannot make a positive identification. Little Joe is released.

Later, as President, Laurel continues in his effort to save Filipino lives. Though he fails to prevent the execution of Jose Abad Santos in Cebu, he succeeds in the case of Roxas, who has been captured in Bukidnon with incriminating resistance documents, but who is brought to Manila alive and is even subsequently given a position in the Laurel government.

In Malacañang itself, Laurel employs a number of military officers and men who have links with the underground. With their help, a clandestine radio is set up in the Palace, and though it has to be moved from time to time because of spot checks made by the suspicious Kempeitai, it keeps the President informed of allied activities in the war.

At one time Laurel receives a tip that his aide de camp, General Jesus Vargas, is about to be arrested by the Kempeitai, who have obtained proof of Vargas’s links with the guerrillas in the hills. Laurel refuses to turn in his aide, and instructions are given to Palace guards to be ready with their arms to repulse any Kempeitai assault. Contingency plans are made for Laurel’s retreat to the mountains. But the Kempeitai back down.

On another occasion, Colonel Nagahama wants to re-arrest Roxas and bring him to the dreaded Fort Santiago. Laurel pointedly tells Nagahama: “You will have to kill me first.” Once again the Kempeitai are foiled.

Laurel’s most difficult game of wits is played not just with the Kempeitai but with the Japanese High Command, including Premier Tojo and Generals Homma and Yamashita. Pressured from the very start to declare war on the United States and Great Britain, President Laurel initially resorts to delaying tactics. Nearly a year later, as the war nears its end, no longer able to resist the pressure on pain of execution, he declares instead that “a state of war exists” (basically a statement of fact) and categorically announces that no Filipino will be conscripted (leading Yamashita to comment that the declaration of war is useless).

Realizing that they cannot use Laurel to the fullest, but unable to purge him because Japanese propaganda has been claiming that the Philippines has been granted independence, the Japanese military authorities organize the Makapili. This is led by Benigno Ramos, former Sakdal chieftain, and Artemio Ricarte, the legendary El Vibora of the 1896 revolution. The plan is to arm the members of the Makapili and put them directly under the Japanese military. At the Makapili launching ceremony, Laurel boldly contradicts Ramos and Yamashita, and declares that even the Makapili are responsible to the Philippine government.

When the tide of war turns and MacArthur makes good on his promise to return to the Philippines, Yamashita brings along the Laurel family and the members of the Laurel cabinet in the dangerous retreat to Baguio, and from there to Taiwan and Japan. After Japan’s surrender, Laurel signifies his intention to turn himself in to the American command in Tokyo, but an American team comes to arrest him just as he is about to leave for Tokyo.

This ends our series of flashbacks and brings us back to the cinematic present.

While the trial proceeds, Laurel is embittered by the fact that President Manuel Roxas, whose life he saved several times during the Japanese occupation, has made no move to help him or the Laurel family in any way. After Laurel is released on bail, he finally gets an invitation to meet with Roxas in Malacañang. But even this turns out to be a humiliating experience. Because Roxas is afraid of what the Americans will say, Laurel is made to enter through the back door and go through the kitchen.

In the end, Roxas undercuts the Laurel trial by announcing a general amnesty for accused collaborationists. Laurel resents this move because it has deprived him of the chance to prove his innocence in court.

Though he has earlier indicated that he is through with electoral politics, Laurel is prevailed upon in 1949 to be the Nacionalista Party candidate for president. Running against the unpopular Elpidio Quirino, who succeeded to the presidency after Roxas died of a heart attack in Clark Field, Laurel seems like a sure winner--but he loses in an election marred by unprecedented fraud and terrorism. Laurel partisans in Batangas take up arms in protest, and Huk emissaries from Central Luzon propose a united front with Laurel in an uprising against Quirino. Though Laurel never concedes the election, he opts for peace, calming down his followers and rejecting Huk overtures.

Two years later, in 1951, Laurel runs again, this time for senator. One of his bodyguards and most ardent supporters is Little Joe, the hitman who once made an attempt on his life. Laurel chalks up the highest number of votes. The election results are seen as a sign of the people’s continuing confidence in Laurel and his vindication at the bar of public opinion.