Narito ang press release ng FDCP tungkol sa mga nagwagi sa timpalak:
***
FDCP kaSAYSAYan Historical Scriptwriting Contest Awarding
July 20, 2010
The Film Development Council of the Philippines (FDCP) awarded the winning scripts of its ‘kaSAYSAYan’ Historical Scriptwriting contest on Monday, July 19, 2010 at the FDCP office.
After an overwhelming response from all over the Philippines and the world, and a gruelling deliberation, only the most brilliant three were named winners.
It was a toss-up between first and second place, but ultimately, “Balangiga” by Jose F. Lacaba took top spot for its sheer brilliance and polish as a full-length screenplay, and Floy Quintos’ impressive “Nan Hudhud Hi Apo Ilyam (Apo Ilyam’s Hudhud)” won second prize. Meanwhile, the “Hollywood-ready” script by Eduardo Rocha and the late Henry Francia (represented by his nephew, Amos), “The Whirlwinds of Dust: The Fall of Antonio Luna” bagged third place.
Apart from these, the judges were impressed with Arnel Mardoquio’s “Mangulayon”, granting it a Special Mention prize for its fresh subject matter and for being a worthy story heralding Mindanao, and being only one of two scripts that represented the Islamic region, geographically speaking.
Meanwhile, out of the scripts that made it to the short list, 20 were set in Luzon, 9 in Visayas, 3 in Spain, 1 in the USA, and 1 in the afterlife. The most common subjects, on the other hand, were the Katipunan and bio-pics or historical places, the Filipino-American war, WWII, and the Japanese occupation. All the 46 entries form a very impressive pool of historical literature and FDCP is willing to assist producers or film enthusiasts who may want to coordinate for projects with the writers/ creators of these scripts.
A deciding body of distinguished educators and industry greats was pooled to determine the winning scripts. Sen. Edgardo Angara headed the Board of Judges, with director-screenwriter Doy del Mundo, screenwriter Roy Iglesias, film archivist Teddy Co, and newspaper columnist Bum Tenorio as members.
Besides their cash prizes, there is a possibility that the winning scripts may be developed into film.
The project was launched in February 2010 in preparation for the year 2011’s being a marker for several notable events in Philippine history, such as Jose Rizal’s 150th birthday, the country’s 65th year of independence from America, and the People Power Revolution’s 25th anniversary.
The contest aimed to find the most captivating yet unknown story, in the form of a full-length screenplay, using Filipino natural history as a springboard.
***
Kung interesado kayong basahin ang dulang pampelikulang Balangiga, pumunta lang sa jokojun.com, ang website ng pamangkin kong si Junjun Lacaba Malillin. Diyan ay puwedeng i-download ang pdf file ng script. Narito ang link:
http://www.jokojun.com/?q=balangiga 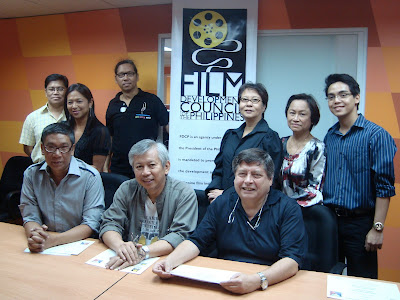 SHOWBIZ LENGUA: BY WAY OF INTRODUCTION

Here’s the introductory piece in my book Showbiz Lengua: Chika and Chismax about Chuvachuchu (Anvil Publishing, 2010), the compilation of 68 columns that I wrote for YES! Magazine from 2003 to 2009.

BY WAY OF INTRODUCTION
ONCE UPON A TIME I had a language column on Pinoy English called “Carabeef Lengua.” The column “Showbiz Lengua,” which appears in YES! Magazine, a glossy showbiz monthly, focuses this time around on the language of Pinoy showbiz—the fascinating, exasperating, continually evolving lingo of the entertainment industry.
I don’t claim to be a linguist or a lexicographer. I just happen to be a diligent consulter of dictionaries. In fact, as soon as I wrote that last sentence, I checked out my Merriam-Webster to see if the word consulter is in it. I am glad to report that it is. In the process, I learned that there is such a word as consultor, which has been in use since 1611 and means “one who consults or advises; especially: an adviser to a Roman Catholic bishop, provincial, or sacred congregation.”
In other words, a consulter is a receiver, one who consults, like a consultee; whereas a consultor is a giver, one who provides consultation, like a consultant.
That’s how I describe myself in my calling card: Editorial Consultant. Which is why friends of mine who are highly paid editors often text me with questions like: “wats d korek spelling, glamor or glamour?” And without a second thought I text back: “both. bt glamour w U s preferd coz it looks more glamorous.” Before I can even receive a message of “tnx,” I am texting again: “note that glamorous s always spelld wo U. ü”
Such consultation is often given gratis et amore to friends who know my cellphone number, but I expect them to pay for my drinks the next time we meet. And when they read this, I hope they will also consider gifting me with prepaid cellphone cards.
As I was about to say before I started to ramble, strict grammarians chide us for using words that are not in a dictionary by claiming that the words in question do not exist: “The word aggrupation does not exist!” My own position on this issue is that, the moment someone uses a word, whether wrongly or wrongheadedly, it comes into existence. The question is whether the word is to be found in any dictionary.
Now the problem with showbiz lingo is that it consists of words that usually have no dictionary existence. Take the word chuvachuchu, for instance, about which I was reminded when I learned that Jolina Magdangal has a restaurant called Chuva-Chicha.
But I have filled up my allotted space, and the discussion of chuvachuchu and chicha and their cognates (achuchu, chukchak, chika, chismax, chuchuwa, chuwariwariwap, chuwap, chuchu, chibog, chichería, chicharon) will have to wait until next month.
First published in YES! Magazine, March 2003

You’ll have to get a copy of the book to read the other 67 columns in Showbiz Lengua: Chika and Chismax about Chuvachuchu. The book costs P295 and is available at National Bookstore branches in the Philippines. Last I looked, it wasn’t on Amazon.com. I don’t know if it will ever get there.
Posted by Ka Pete at Monday, November 22, 2010 1 comment: 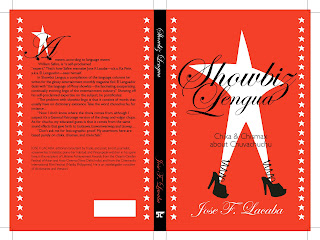 Showbiz Lengua: Chika & Chismax about Chuvachuchu (Anvil Publishing), a compilation of the columns that I write for the monthly YES! Magazine, is now off the press, and available at National Book Store, at P295.