EDJOP AND THE FIRST QUARTER STORM

Today, January 26, 2010, is the 40th anniversary of the start of the First Quarter Storm of 1970. In commemoration of that now historic event, I am posting the following piece, a belated apology to the late Edgar Jopson, which appears as an appendix to the updated edition of my book Days of Disquiet, Nights of Rage (Anvil Publishing, 2003). The appendix comes with the following note: “Slightly revised version of the foreword to Edjop: The Unusual Journey of Edgar Jopson, by Benjamin Pimentel Jr. (Ken Incorporated, Quezon City, 1989).”

I never really knew Edjop. I expect that he and my brother Eman knew each other, since they were at the Ateneo de Manila at about the same time; and we had a mutual friend in the poet Alfredo Navarro “Freddie” Salanga. But we never really met face to face, Edjop and I; we were never formally introduced. I saw him from a distance at various demonstrations, and I have a vague recollection of seeing him at closer range inside a University of the Philippines dorm, when the Bantay refugees were briefly housed there.

He had the misfortune of coming into my line of vision just when I was, as a writer, undergoing what was then known as “politicalization.” I had come from the Ateneo myself (AB ’65, Dropout ’64), but I had this ambivalent attitude toward my alma mater: no doubt it contributed to my intellectual growth, but it turned me into a misfit, because at the Ateneo I was a poor boy (on scholarship) in a school for the rich, and after the Ateneo I was Adam after eating of the apple, Persephone after tasting of the pomegranate.

The social discomforts notwithstanding, I was almost completely apolitical in college, though the Tagalog poems I was beginning to write at the time already betrayed an incipient disquiet hiding behind a pose of gentle irony. “Politicalization” was a by-product of journalism, which took me to cocktail parties at chi-chi hotels and to drinking sessions in foul-smelling slums, which in turn intensified both philosophical and physiological nausea, which thereby sharpened the existential angst and the essential rage and gave them political shape.

It was at that point in my “politicalization” that my work brought me into contact with the various shades of student activism, and it was therefore not surprising that I was not disposed to look kindly upon any hoity-toity Atenean claiming to be fighting for the upliftment of the hoi polloi. My sympathies were with the scruffy firebrands coming out of the public schools and even the diploma mills, rather than with the Ms. Cleans and the Little Miss Muffets from the exclusive schools.

This explains the ill-concealed antipathy for Edjop and his kind in the reports I wrote at that time. When I started collecting the articles that would go into my book, Days of Disquiet, Nights of Rage, Edjop was dead, and I wondered whether I should write an afterword or appendix tracing the amazing routes that the dramatis personae in my reportage had taken since martial law: fire-breathing radicals had become apologists for fascist dictatorship, while Edjop, the epitome of reformism and moderate student politics, had joined the armed struggle. In the end, not without a nagging sense of guilt, I decided to let the collection stand as a historical document without benefit of updates or post mortems. I subsequently expressed my mea culpas to Edjop in a Tagalog poem, “In Memoriam,” written sometime after the Ninoy Aquino assassination, but I knew that wasn’t really enough.

I am glad that Benjamin Pimentel Jr. has decided to redress the balance with a book that takes up where Days of Disquiet leaves off. If there is anything to be learned from Pimentel’s extremely absorbing account of Edjop’s “strange odyssey,” it is the fallibility of first impressions and of built-in prejudices. For here, in various unpredictable circumstances, is where the children of the First Quarter Storm are now, almost twenty years later: some betrayed the passions of their youth and some kept the faith; some backtracked and some persisted; some moved on to other lifestyles and some simply changed their methods of struggle; some went on fighting and some were immobilized by fear or weariness or domesticity or the frenzy of the rat race or all of the above; some took the high road and some took the low road and some, like Edjop, chose to veer away from the well-worn paths to take “the road less traveled by.”

This is not just the biography of one person; it is the history of a generation. 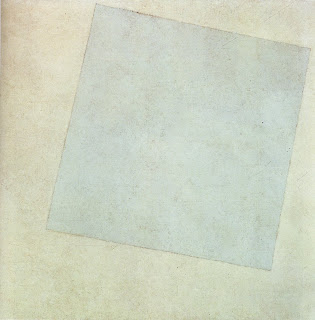 
On Malevich’s “White on White”

Of purity almost nothing can be
said with strength. It is quite easy to spit
on rot and curse the harbinger of it,
but the only things to say of the saint are three:
his past until it was bathed suddenly
by a flash in the mind; his struggle as he pits
strength against the abscess to keep lit
the present; and speculations, really
nothing, on his future, where he will stay.
What can you say of purity patched on
purity? There can be no lighted way
firmly pointing to the prepared inn.
You can only paste faith to a silent heart,
marvel at the absence of a wart.